On a recent trip to Japan, Colin and I thought it’d be fun to visit a baseball game. The Japanese culture is so sweet and I was really looking forward to experiencing how they do baseball. Let me tell you, it did not disappoint! 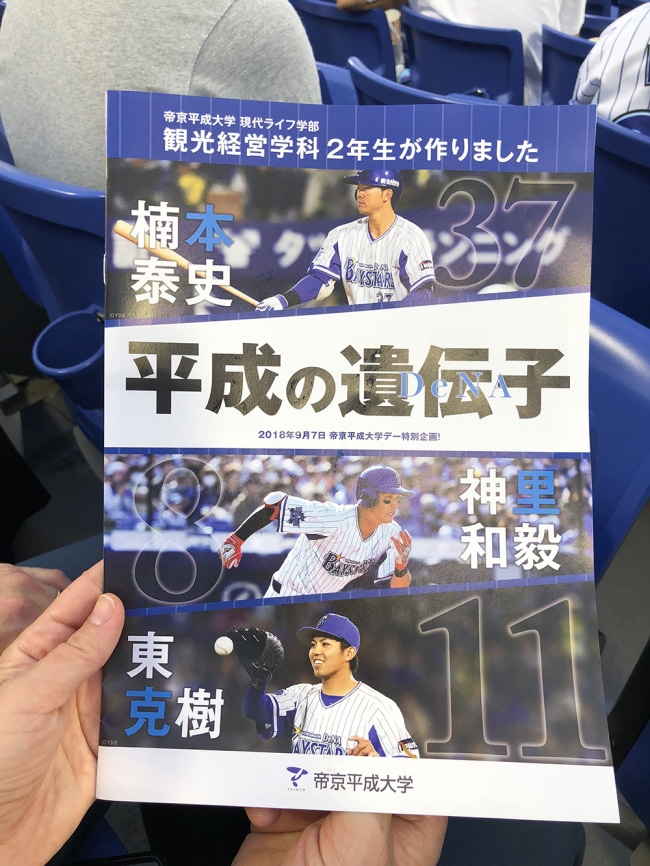 We had time in our schedule while we were visiting Tokyo so we looked for a game somewhere in the vicinity – within an hour of Tokyo. There are several teams in the vicinity but the Yokohama Baystars happened to be playing so we settled on looking for tickets to one of their games, which were pretty hard to track down. We ended up finding two tickets through the concierge at our hotel, who I believe got them from a ticket broker of some sort. We learned that baseball is really popular and games are almost always sold out so it’s best to plan ahead, if you’re able. 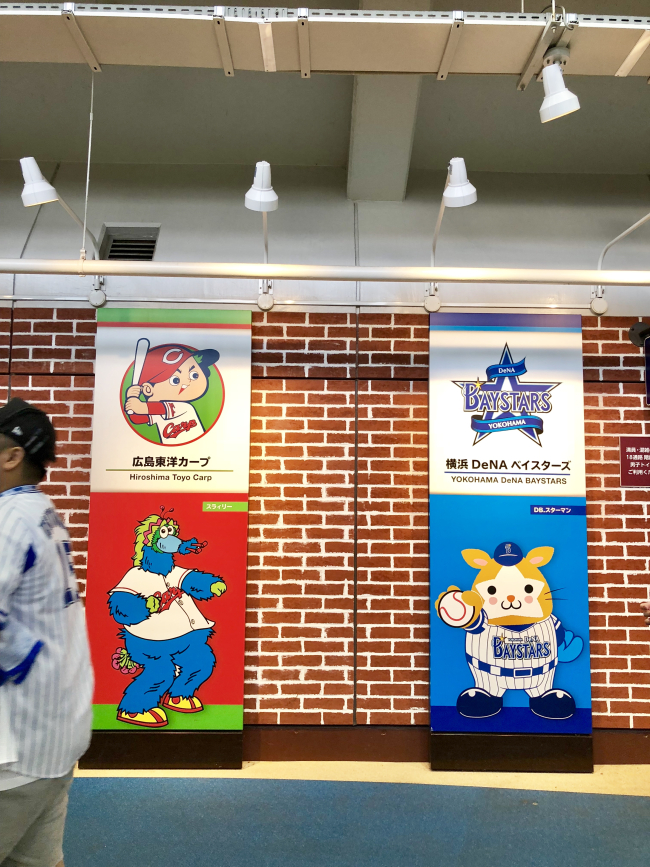 We took the subway to the game, which took about an hour. We’ve taken the subway to baseball games in a lot of major American cities and one thing you can always expect is that the fans are GEARED OUT! Jerseys, hats, foam fingers, etc. But we were so surprised that this is not the case in Japan. We were actually wondering if somehow we were on the wrong train because NO ONE was wearing gear. When we got to our subway stop and were walking towards the stadium, still nothing. Then all of a sudden, the walls on the subway said, Welcome to Yokohama Stadium, and once again, we were so surprised we had arrived at the area because you wouldn’t have known it with the fans. Once we were in the outside walkway heading into the stadium, we noticed a couple of fans wearing jerseys. We had arrived! 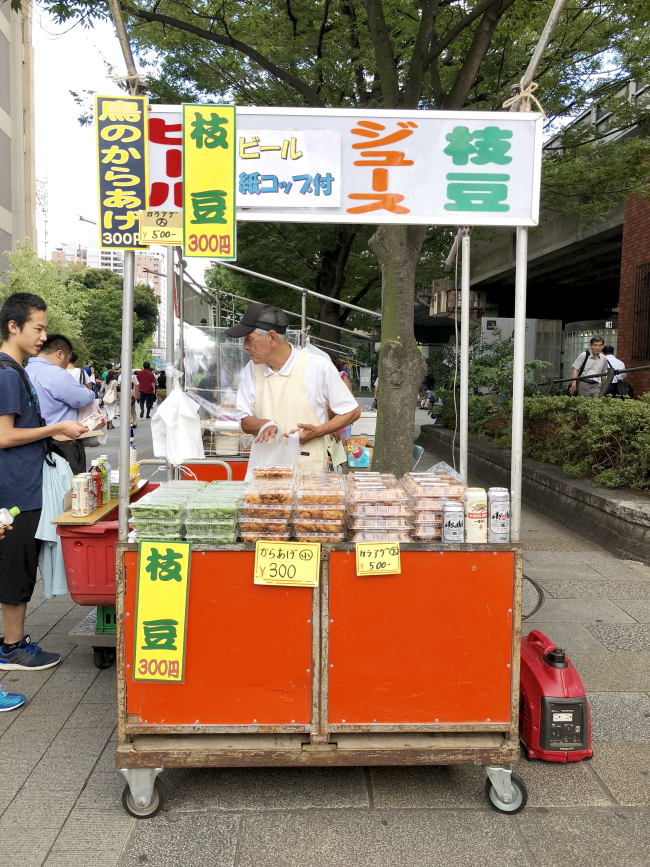 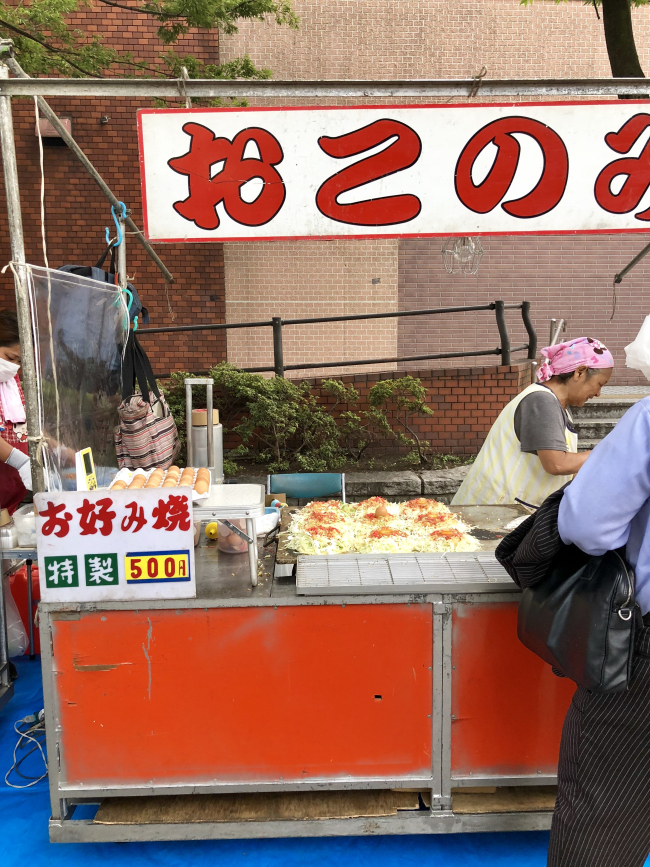 At the Seattle Mariners games, one of the things we really enjoy seeing on the walk up towards Safeco Field is the food vendors. Happily, Yokahama had food vendors too. While the U.S. has food like hot dogs and peanuts, Japan (at least Yokohama) has Okonomayaki (A special savory pancake with tons of veggies, egg, and a bit of a pancake type batter) and edamame. Inside the stadium, there are so many fun food options such as  tons of different bento boxes, fried chicken with a curry breading, shaved ice topped with mandarins, hot dogs, tiramisu and more. 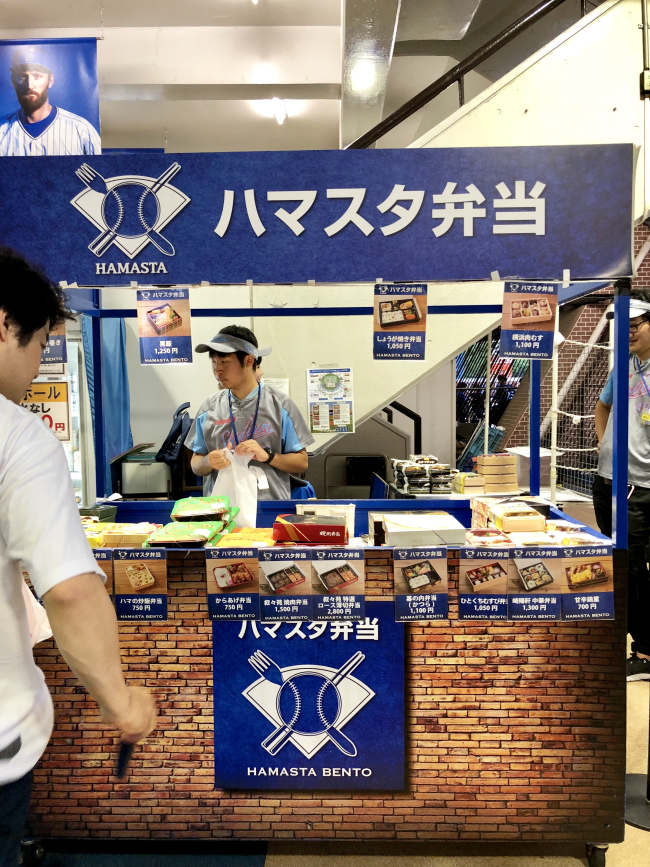 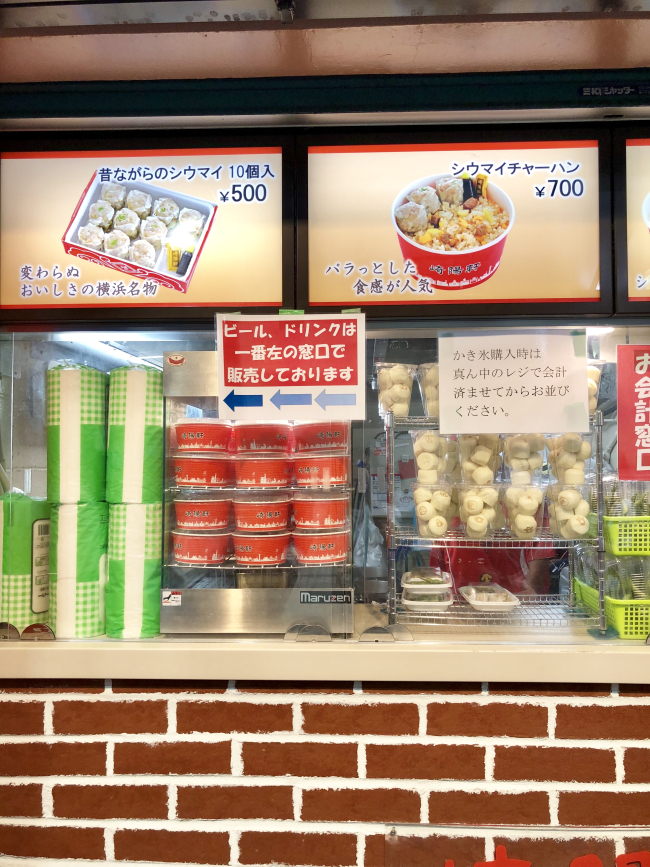 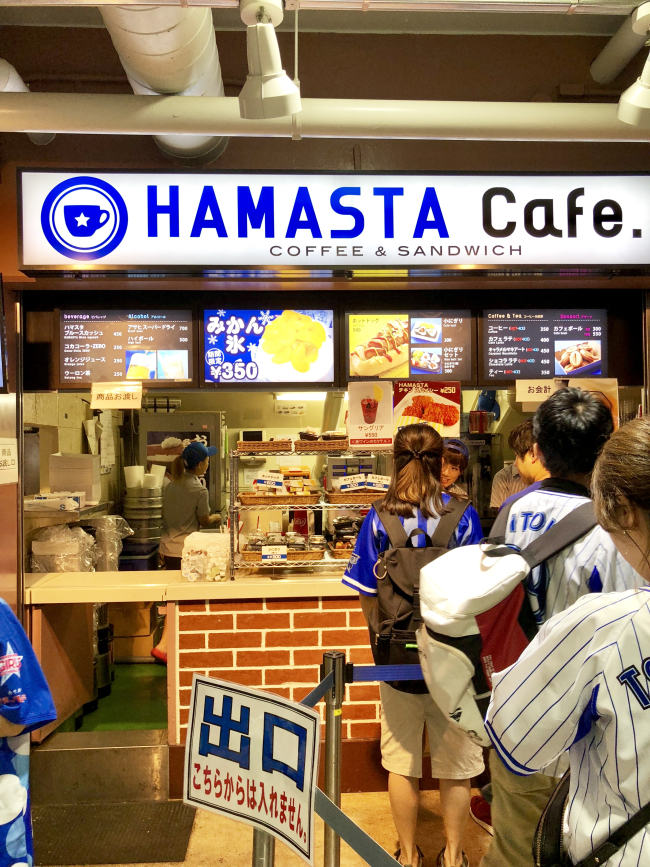 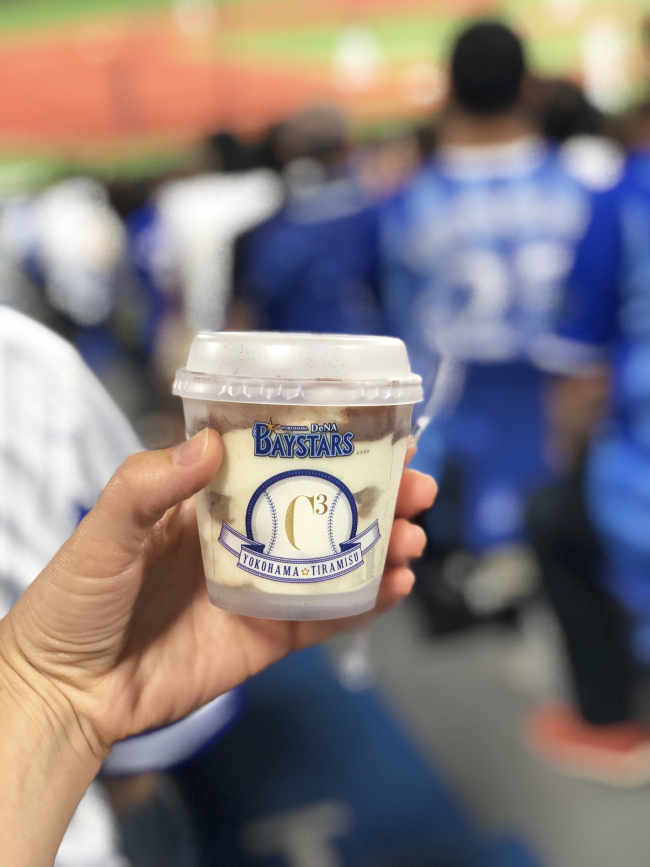 My favorite treat of the night: Tiramisu

Once the Japanese fans are IN the actual stadium, they start changing into their team shirts and their fandom spirit seems to come to life. And don’t you worry, if you’re a fan and don’t already have your gear, there’s tons of merch to buy! But something that’s so different here is that merch is available for BOTHteams that are playing. Can you imagine going to a Yankees game and them selling Red Sox gear?! That’d never happen! Japan is different that way. It’s just such a considerate culture, I wouldn’t expect anything less.

A real bonus with attending a Baystars game is that there are a ton of announcements in English, which I guess isn’t common, so we were really happy about that. Once you sit down in your seat, you can’t help but notice some big differences to an American baseball stadium. First of all, the seats are TINY. I’m a small person and I felt very squished. Everything is veryclean (as are the majority of the public spaces in Tokyo). Many of the fans have little garbage bags hung at their seats where they put every bit of their garbage. There is NO garbage tossed on the floor. None. In fact, someone near us spilled a beer and everyone took immediate notice. And just as quickly as the beer had been spilled, there was an employee there with a mop to thoroughly clean it up. 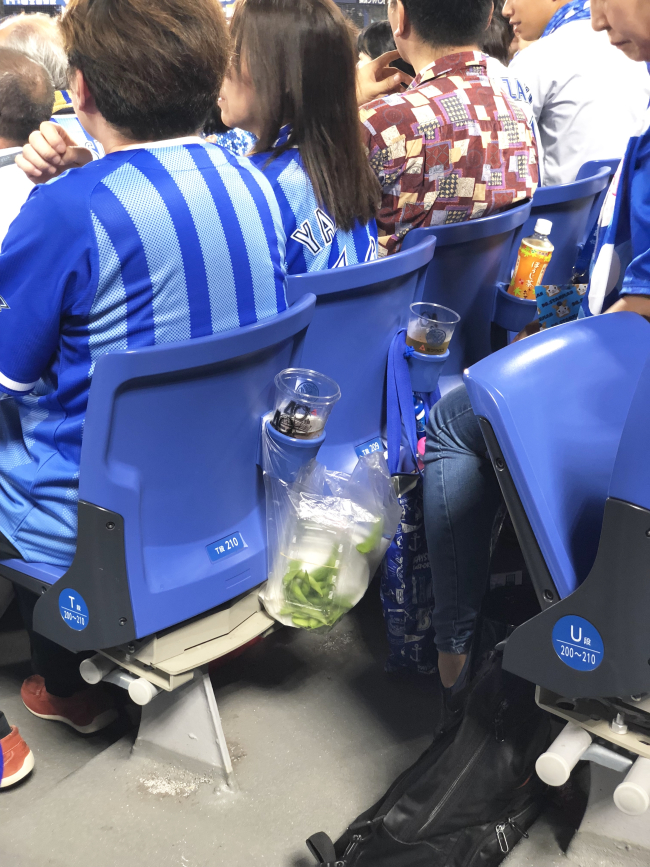 And speaking of beer, there are “beer girls” who have mini kegs on their backs and they are constantly going up and down the stairs, offering beer for purchase. We learned later on that many people have their favorite “beer girls”, many of them with quite a following, and people like to order from their favorite young ladies. The day we attended, it was really hot and humid and the ladies were working incredibly hard. They do not have an easy job! 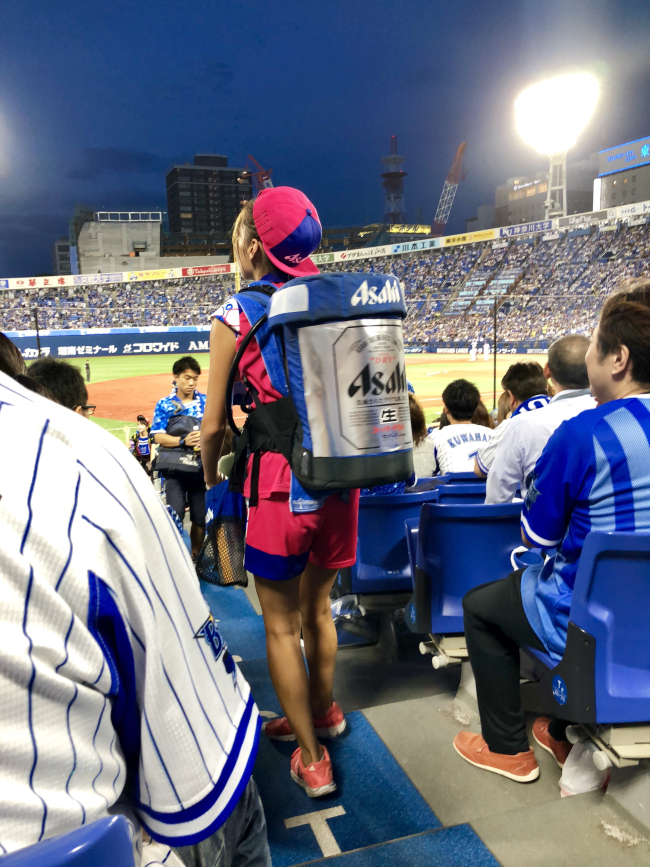 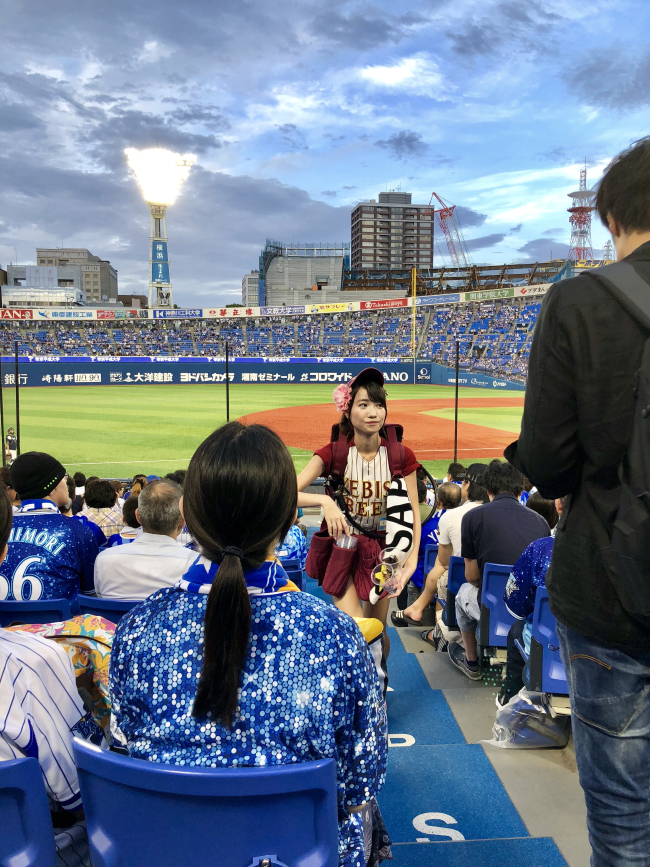 So you’re sitting there taking in all that’s going on before the game starts and then guess who appears? Cheerleaders! Japanese baseball has cheerleaders! And let me tell you, there are SONGS. So many songs. A song for each team, and a song for each player and everyone knows the words. When each player comes up to bat, the spectators begin to sing the player’s song and keep repeating it the entire time the player is up to bat. I couldn’t help but wonder who comes up with each song? It was really endearing. But one of my favorite highlights? The mini monster truck that takes the field a few times between innings with a machine-gun type apparatus that shoots t-shirts out into the crowd. 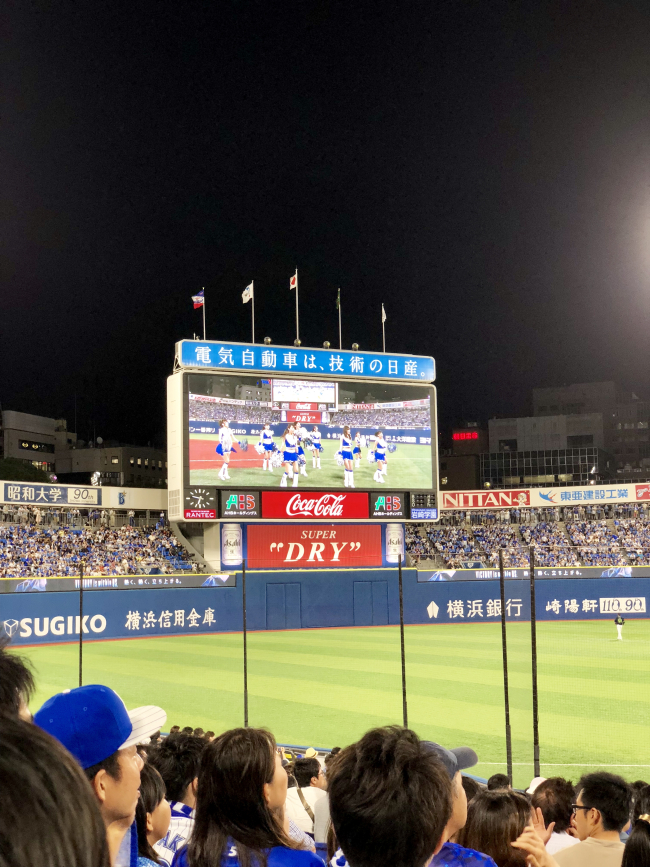 Just before the 7th inning stretch, you see most of the spectators pulling out packages of balloons that they begin to blow up and then all at once, they let them go and the air is filled with balloons crazily flying all over before raining back down again, only to be cleaned upright away. It was funny to see a tiny bit of mayhem and such order go hand in hand. 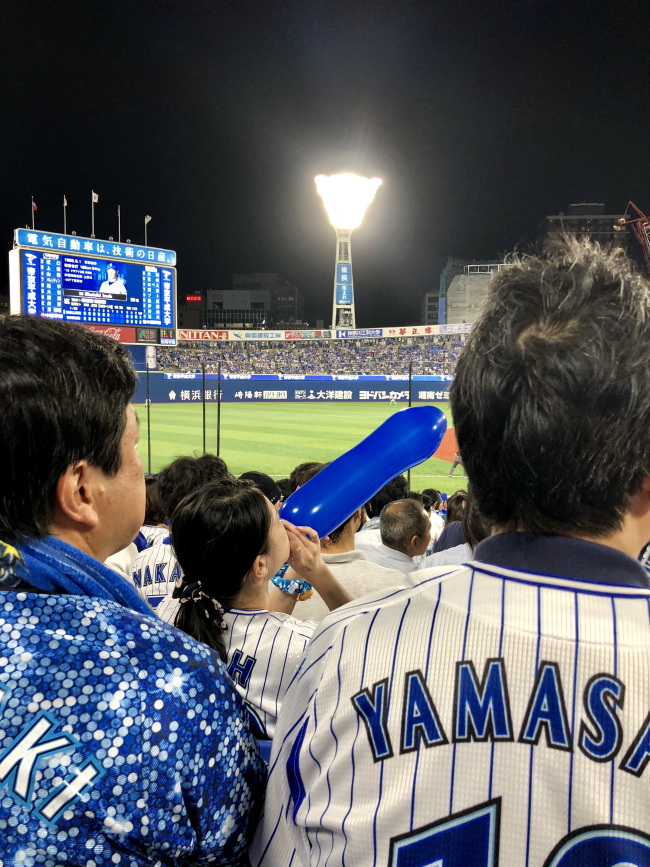 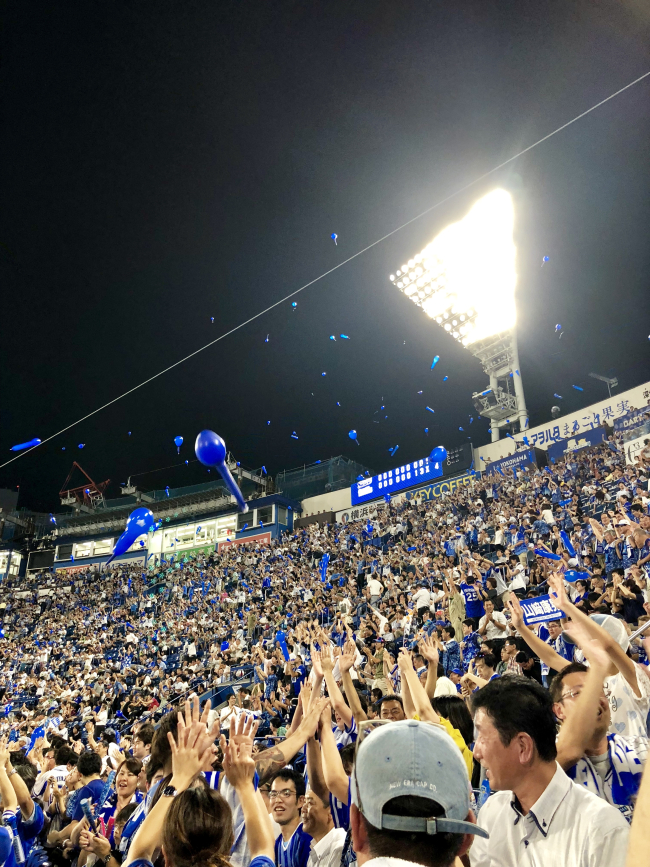 The night ended on a high note when the Baystars won the game and we were treated to a huge fireworks show which most fans seemed to stay for. It was really fun to see how the Japanese culture has taken our American baseball and given it their own twist that is fitting for them. As we made our way back to the subway, we watched as the fans removed their jerseys and made their way out, dressed once again in their everyday outfits. The subway back to the hotel was of course, completely silent. 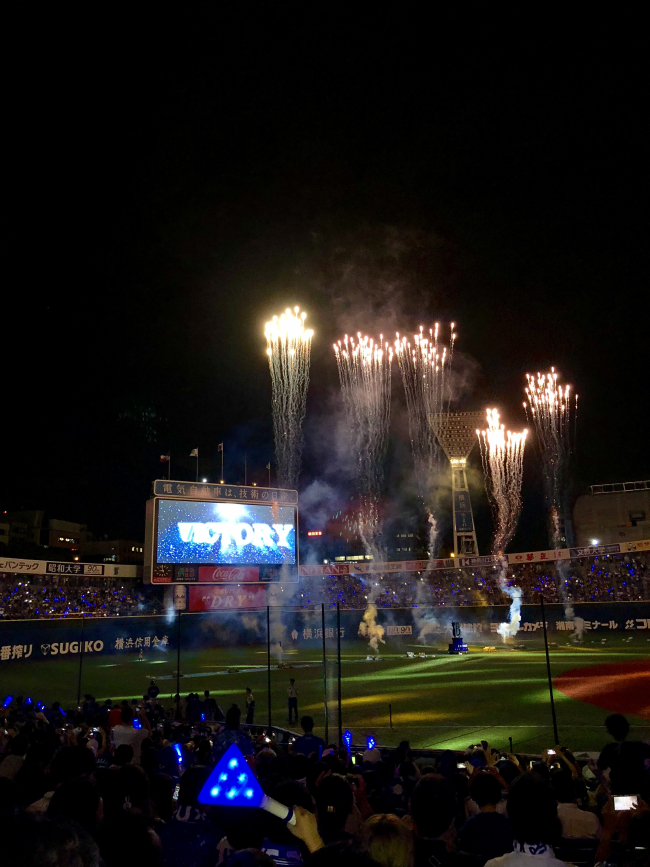 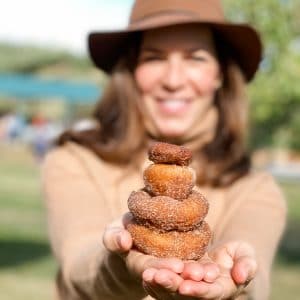 Chandler and I went on a pumpkin donut tasting adventure to GreenBluff last week. It's harvest festival time on the bluff and as always, it did not disappoint. As you might imagine, the pumpkin donuts were super tasty as well!Although life is altered because of Covid,...

END_OF_DOCUMENT_TOKEN_TO_BE_REPLACED 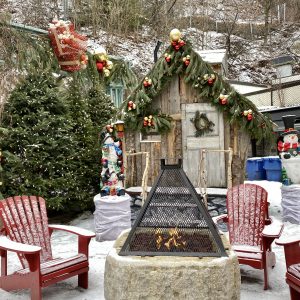 Colin and I just returned from a visit to Quebec where we got our fair share of Christmas inspiration and holiday cheer. It's such a beautiful old city with stunning architecture reflecting its French roots. Visiting Quebec during the holiday season is such a special...

END_OF_DOCUMENT_TOKEN_TO_BE_REPLACED 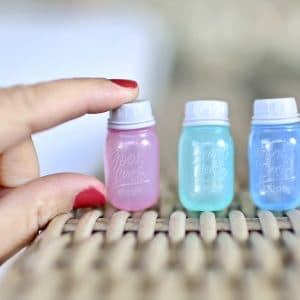 About the Japanese Dollar Stores in the USA

We're lucky enough to have several Japanese dollar stores (Daiso) in the Seattle area of Washington State and visits there never disappoint. I'm always surprised that everyone doesn't know about these cutest shops and I thought it'd be fun to give you a peek...