Why They Called Us Vagabonds 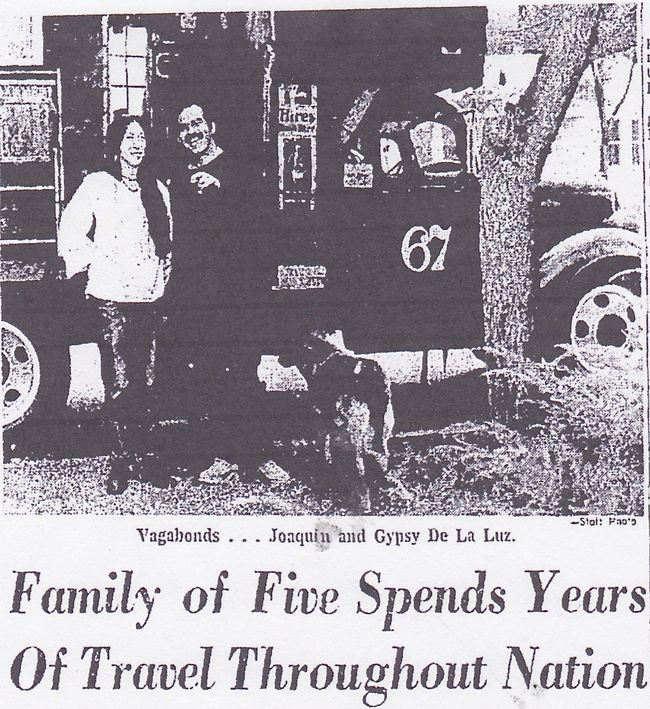 I found this article from my childhood family life recently. I enjoyed reading it and think it’s a good look into my dad’s mindset, especially:

“Freedom,” said Joaquin De La Luz, “is not all luxury.”

De La Luz, his wife Gypsy and their three children have been on the road for the past four or five years, going where and when they choose.

They rolled into Amarillo last night, and planned to leave early this afternoon. Gypsy adds that they were in pretty tight straits just east of here. Then they picked up a pair of hitchhikers who contributed to gas and found them a place on the block of S. Polk to park for the night.

They’ve been through 17 states and Mexico. Some they’ve driven through, some they lived in for a while. When they are ready to go, the truck-home that De La Luz built for his family is ready to go with them.

Gypsy describes the only time their mobile home wasn’t mobile: “We were stopped on top of Mount Hood, Oregon, and the truck literally froze to the ground. We stayed that way for more than six months.”

Joaquin sees the truck as an expression of his life and art. “Everything is a work of art, life should be an art,” he said. De La Luz considers art a functional thing, a part of living.

“I don’t paint something to be hung on a wall,” he said. “This truck, the way we live, is our expression of our art,” he added.

The truck – home they live in was begun 2 1/2 years ago, and is still in the process of being completed,” said De La Luz.

De La Luz said he was tempted to call the truck the “American Dream” because it is mobile, free and self-supporting. “People come in, we talk, and they are welcome,” said De La Luz. For the money they need, De La Luz will exchange a postcard picture of the truck for “whatever people want to contribute.”

“All we want is to be really real,” said De La Luz. “We don’t want to trick anybody”.

Throughout their travels, he said, “People have been good to us.” Almost everywhere they go, he explained people are generous about allowing them to park and sometimes they “give something, an antique or whatever”.

By way of example, De La Luz remembered a man in Minehaha Falls, near Minneapolis who came to visit. He was a tourist and appeared affluent. They talked. After they had visited, the Los Angeles businessman recalled the sentimental years he spent on the road, he asked if they had a camera to record their adventure.

They hadn’t, and he gave them one.

Bound now for California, they family plans to write a book about their travels and visit with relatives. Someday they hope to get some land, and settle. “Maybe in Montana,” said De La Luz.

“The children are getting to the age where they need to relate to others their own age,” said Gypsy.

The children are Heather, age 7, Bear, 5, and Serena, 2. The family also includes their dog, “Girl.”

After their years of travel De La Luz and his wife agree: “People basically are all the same-only their costumes and accents change.”