I recently came across this clipping from my childhood days growing up in my family’s gypsy wagon home on wheels my dad built by hand. This article came from the Daily Inter Lake Newspaper in Kalispell, Montana, one of the many places we traveled through during our life on the road: 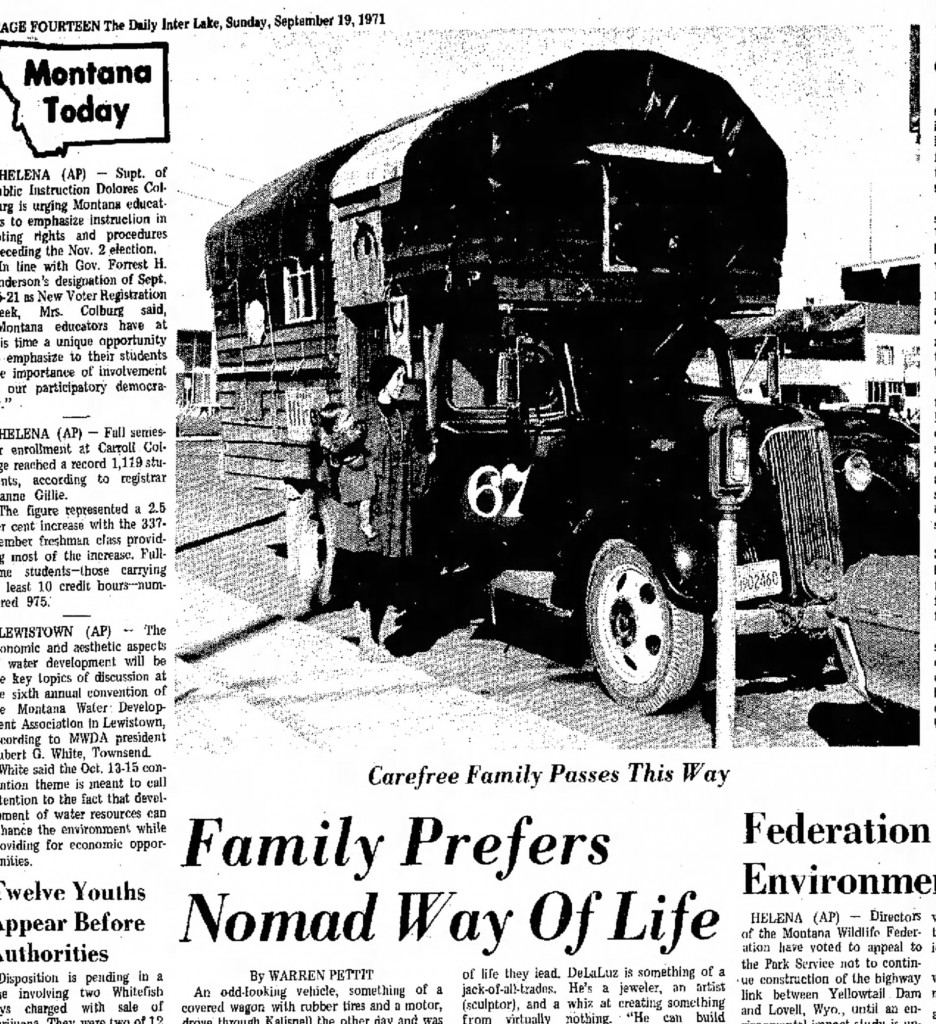 An odd-looking vehicle, something of a covered wagon with rubber tires and a motor, drove through Kalispell the other day, and was different enough to attract attention.

Not only was the vehicle different, but so were its owners – in an interesting and most unusual way.

The travelers were Mr. and Mrs. Joaquin De La Luz and their three children, Heather, 6, Bear, 4, and Serena, 1. Also part of the family is a big, friendly dog but we didn’t get his name.

Mrs. De La Luz’s name is Gypsy and it’s appropriate because you might say the family is gypsy-like.

You see, they have no home – as such – except the home-made unit in which they travel, a combination trailer house-camper with a barn-like design and complete with two “bedrooms,” sink, wood burning stove and a kerosene lamp. The outside has siding like a home and is dotted with old metal advertising signs displaying products long-since forgotten or no longer on the market.

They’ve been on the road with the rig for three years going through several western states.

Where are they from? “We really didn’t have a starting point, but it was somewhere between Oakland, Calif., where my husband was born and New York City,” where I’m from said Mrs. De La Luz.

Where are they going? “We really have no idea, don’t particularly care, and actually don’t give it much thought – wherever the road leads is our destination day by day”.

However, they are planning an itinerary – subject to change anytime – which may take them to Canada. They feel there’s a chance they may settle down and make a home in British Columbia if they find opportunities and conditions to their liking. They’re not in a hurry but feel they should settle with the winter near.

As to the children’s education, their mother is providing that for Heather – who just reached school age – but she’ll have to join kids in a regular classroom when they get to Canada.

The whole family loves the “life of wanderers” they lead in going anyplace they choose, when they wish, for as long as it strikes their fancy.

There are no economic problems in the way of life they lead. De La Luz is something of a jack-of-all-trades. He’s a jeweler, an artist (sculptor) and a whiz at creating something from virtually nothing. “He can build anything,” said his wife. He built their rig which is mounted on the frame of a 1937 Chevrolet truck which he overhauled and is in good running condition.

You might say the family is “roughing it” in their mobile living. Their home on wheels isn’t fancy with all of the modern fixtures and conveniences of a factory product costing thousands of dollars. But it’s warm, dry and comfortable and this is a family that is content with inexpensive, old-fashioned living – they have everything they need or want and they don’t desire luxuries.

Status, prestige and material things rate low in their sense of values. They have something far more precious upon which their lives are based. As Mrs. De La Luz put it, “We live by faith. We don’t go to church – we just believe in God. Perhaps I could explain it better by saying we go to church in our hearts every day, not just Sunday. Each person should exercise his faith in his own way and this way feels right to us.”

There is one point which should be made clear. These free and easy-living nomads are not of the type one would place with the “Now People” or the kind of persons commonly classified as hippies. They make their own way and expect help from nobody. De La Luz trades his art work for gas and food and they pick fruit or do almost any kind of odd jobs along the way to meet their needs.

Surprisingly there have been no problems of sickness with the children despite frequent changes in water supply, climate and other factors. Their mother attributes this to her selection of food. She avoids chemically sprayed foods and stays with natural herbs, grains, whole wheat flour, honey, fruits and vegetables as part of the basic diet.

Why have they chosen this way of life? Mrs. De La Luz summed it up in a few words.

“We like to see the land, visiting new places and meeting people. We’ve found a lot of beautiful people in our travels and it makes you feel good to know there are so many good persons in the world. We enjoy ourselves living this way and think that is important – for people to choose their own way to get as much enjoyment out of life as possible.”

Today, as with most days of my life, I stop to give thanks to be born of two such creative souls who blazed their own trail, and now, I blaze my own too.

You can read more about my family history here.