When I started Kindergarten, my family had temporarily settled into a tiny shack on the Klamath River in Northern California. The house was just off the road, so there was always a lot of action going on beyond our doors. This was Croy Gulch.

My parents made their bedroom in the garden, in part to enjoy the cool that the evening would bring and in part to guard the tomatoes from the deer. An old clawfoot tub was in the garden as well, filled with water to be warmed by the sun and where we’d take our occasional baths. We’d wash our clothes by hand and then run them through the wringer, that sat just on the other side of the garden. My brother and sister slept in the main house and the gypsy wagon was my bedroom, which meant I was closest to the road. 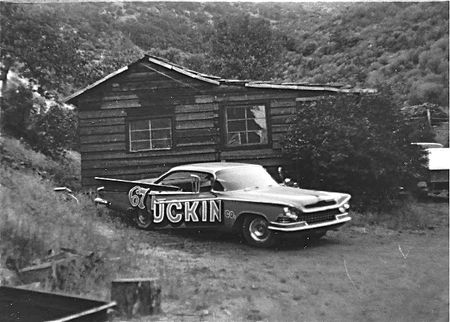 One summer night as we all lay sleeping, a commotion arose in the driveway. Bright lights, scuffling, car doors, banging, and then a booming voice: THIS IS THE POLICE! YOU ARE SURROUNDED! COME OUT WITH YOUR HANDS UP!

My mom came flying out from the garden with her hands in the air and was met by a police squadron with their guns drawn. “I SURRENDER! I SURRENDER!“, she screamed.

What ensued was a standoff between a man who had robbed a store down the river and the police, following a chase that had ended in our driveway. In the end, we were safe and the robber taken away, but it was the beginning of a long string of high drama summer incidents that marked our stay at Croy Gulch.

Living just off the road was a sort of entertainment for us kids and oftentimes, we’d stand at the edge of the driveway watching the cars go by. “Flatlanders!”, we’d say about the people in each car that’d pass, imagining they were from the city. The flatlands, as we called it.

They weren’t tough like us, we imagined. Because we were adventurers. Tenders of the goats, hunters of rattlesnakes, and always covered in poison oak and big white dots of Milk of Magnesia, applied to dry out the sores.

Our favorite days were the ones when the road crew would come through. When my mom saw them coming, she’d pull out my grandma’s old dough bowls and make her famous homemade bread. We’d take the hot, steaming thick slices out, covered in big slabs of butter and feast with the crew. They always made sure to set up their base at our driveway whenever they were nearby.

Eventually, the BLM who owned the land we were renting, informed my parents that they needed to remove the shack from their property. So they threw a huge house tearing down party and then, just like that, we moved on.

Because that’s what adventurers do.

Footnote: The 67 Truckin Co. seen on my family car (above) was sort of like our family brand. 1967 is the year my parents met and my dad painted 67 on many of our vehicles and gypsy wagon.